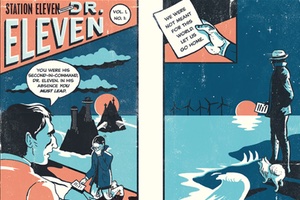 Since its publication in 2014, Canadian author Emily St John Mandel’s Station Eleven has attracted enthusiastic critical responses. This post-apocalyptic novel won an Arthur C. Clarke Award for Science Fiction in 2015 and was shortlisted for many other awards, including the National Book Award, the PEN/Faulkner Award, and the Bailey’s Women’s Prize for Fiction. In this OLH Special Collection, we seek to explore Station Eleven's position within twenty-first-century writing.

Station Eleven intersects with various debates in contemporary literary studies, opening up questions about genre, politics, national literary traditions, literary form and intermediality, popular culture and prize culture. The novel partakes in what James Berger describes as the “pervasive post-apocalyptic sensibility in recent American culture”. This sensibility is no longer the sole province of science fiction, as canonical literary authors like Cormac McCarthy and Jim Crace have written novels imagining post-catastrophic futures. Indeed Veronica Hollinger speaks of the “'disappearance’ of science fiction as a separate generic enterprise” in the contemporary and Mandel herself, Arthur C. Clarke Award for Science Fiction notwithstanding, identifies her novel as literary fiction rather than science fiction. How might Station Eleven help us to frame issues of genre in twenty-first-century writing, in particular the debate between “literary fiction” and “genre fiction”, and how are these issues entangled with the production of cultural capital through literary prizes? Biblical apocalyptic narratives, as Lois Parkinson Zamora underlines, “developed in response to political and moral crises”. To what do we owe the contemporary surge of post-apocalyptic narratives and is Station Eleven radical or conservative in the way it imagines a hopeful future after global capitalism?

The Rise of the Comics Künstlerroman, or, the Limits of Comics Acceptance: The Depiction of Comics Creators in the Work of Michael Chabon and Emily St. John Mandel