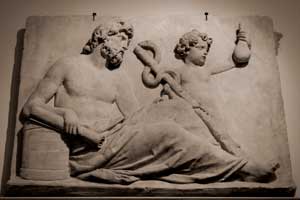 The following articles have been published as part of the special collection, ‘Healing Gods, Heroes and Rituals in the Graeco-Roman World’, edited by Professor Panayotis Pachis (Aristotle University of Thessaloniki). The first two articles in this collection interrogate the figures of specific healing gods. Olympia Panagiotidou’s article ‘Asclepius’ Myths and Healing Narratives: Counter-Intuitive Concepts and Cultural Expectations’ focuses on the curative features that defined the image of Asclepius, the most famous of the healing gods. The next article in the collection, ‘The Fate of a Healing Goddess: Ocular Pathologies, the Antonine Plague, and the Ancient Roman Cult of Bona Dea’ by Leonardo Ambasciano, interrogates the religious figure of another healing agent: the Italian goddess Bona Dea who was particularly venerated in Rome and in the region of Latium and whose cult reveals the way in which ancient Roman androcentric control over women was institutionalised through religious figures.

The third article in the collection, Audrey Ferlut’s ‘Goddesses as Consorts of the Healing Gods in Gallia Belgica and the Germaniae: Forms of Cult and Ritual Practices’ considers the impact that cults dedicated to gods and goddesses had on populations in the wider area of the Roman Empire, focusing on the Northern provinces of the Western Roman Empire (Gallia Belgica and the Germaniae). The collection’s final article, ‘From Textual Reception to Textual Codification: Thessalos and the Quest for Authenticity’ by Spyros Piperakis, moves the discussion from the question of cult practices to ‘alternative’ healing therapies in antiquity. Piperakis deals with astrological medicine, one of many alternative therapeutic methods that became popular during the Hellenistic and Roman period.

Taken together, the articles in ‘Healing Gods, Heroes and Rituals in the Graeco-Roman World’ demonstrate that we need to approach the study of ancient myths and cults within their socio-cultural context. These articles thus challenge traditionalist approaches to the history of religion and reveal the richness of interdisciplinary approaches in the twenty-first century: offering new paths of inquiry that could help us to extract new data and shape a new interdisciplinarity in the current and future research of the religions and cults of Antiquity.

The Fate of a Healing Goddess: Ocular Pathologies, the Antonine Plague, and the Ancient Roman Cult of Bona Dea

From Textual Reception to Textual Codification: Thessalos and the Quest for Authenticity

Goddesses as Consorts of the Healing Gods in Gallia Belgica and the Germaniae: Forms of Cult and Ritual Practices

Museum Engagement as Speculative Design The Pathological Body: European Literary and Cultural Perspectives in the Age of Modern Medicine Reading in Ruins: Exploring Posthumanist Narrative Studies The Language of Perspective Nancy Astor, Public Women and Gendered Political Culture in Interwar Britain The Working-Class Avant-Garde Colonialities in Dispute: Discourses on Colonialism and Race in the Spanish State Powering the Future: Energy Resources in Science Fiction and Fantasy Writers and Intellectuals on Britain and Europe, 1918–2018 Literature, Law and Psychoanalysis Muslims in the Media Encounters between Asian and Western Art in the 20th and 21st centuries: a liberating influence for Asia? Waste: Disposability, Decay, and Depletion Pride Revisited: Cinema, Activism and Re-Activation New Approaches to Late Medieval Court Records Utopian Art and Literature from Modern India Right-Wing Populism and Mediated Activism: Creative Responses and Counter-Narratives Representing Climate: Local to Global Cultivating Spheres: Agriculture, Technical Communication, and the Publics Freedom After Neoliberalism The Medieval Brain New Approaches to Medieval Water Studies Remaking Collections Imaginaries of the Future 02: Politics, Poetics, Place Imaginaries of the Future 03: Utopia at the Border Imaginaries of the Future 01: Bodies and Media Postcolonial Perspectives in Game Studies Station Eleven and Twenty-First-Century Writing #Agreement20 What’s Left? Marxism, Literature and Culture in the 21st Century New Voices in Jewish-American Literature Authors, Narratives, and Audiences in Medieval Saints’ Lives From TV To Film American Literature & the Transnational Marketplace Mnemosyne Healing Gods, Heroes and Rituals in the Graeco-Roman World The Abolition of the University