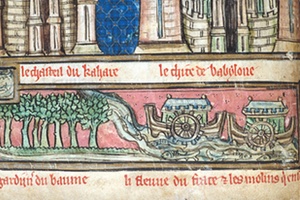 Recent scholarship in water studies has generated several germane streams of new methodological approaches, each relevant to medieval history. This OLH Special Collection will showcase the state of the field for medieval water studies, tease out its salient themes, and demonstrate possible futures for the field. In the last decade, new attention has been paid to the role of water as both a literary metaphor and a cultural reality in the Middle Ages, with exciting results. In The Sea and Medieval Literature (2007), Sebastian Sobecki fruitfully explored how water is used to communicate ‘Englishness’ in various different medieval texts. In environmental history, Ellen Arnold’s Negotiating the Landscape: Environment and Monastic Identity in the Medieval Ardennes (2013) has initiated a new assessment of medieval spiritual relationships with the environment, and has led to a subsequent project on early medieval rivers and waterways. Carole Rawcliffe has shed new light on how urban medieval people conceived of water and dealt with its various challenges in Urban Bodies: Communal Health in Late Medieval English Towns and Cities (2013) and, in a related field, critics like Elizabeth Archibald, Liz Herbert McAvoy and Albrecht Classen have investigated the bathing practices of medieval people, reflecting on how the various customs and associations of medieval bathing manifest themselves in literature of the period, from romances to devotional works.

This work emerges as part of a greater discourse on medieval hygiene and cleanliness, showcased in a volume edited by Classen entitled Bodily and Spiritual Hygiene in Medieval and Early Modern Literature (2017). This trend is accompanied by a corresponding growth in nuanced studies of Christian baptism, including The Visual Culture of Baptism in the Middle Ages: Essays on Medieval Fonts, Settings and Beliefs (2013). Moreover, three thriving areas of medieval studies—namely emotions history, ecocriticism, and the history of travel and cartography—must necessarily encompass water, as an integral part of the medieval landscape and as a conduit for emotion, in the form of tears.

This collection will make an original contribution to a growing debate by: a) setting the scene for new multi- and inter-disciplinary water studies through a speculative survey essay from the editors; b) showcasing perspectives from authors in very different disciplines as a state-of-the field snapshot; c) encouraging the authors to speculate on the methodological challenges of their respective studies; and d) contributing to the understanding of wider environmental humanities themes emerging from the study of water in the Middle Ages. The first criterion will be of great value to those seeking to enter or advance the field, the second will contribute new research to medieval water studies and the wider studies of medieval environment and imagination, the third will provide a new collection of tools, and the fourth will be of value to water historians, water management practitioners, and water governance experts in need of pre-modern context for their work.

Featured image in the public domain, held at the British Library.

Fluid Boundaries in The Awntyrs off Arthure and Sir Isumbras

Drinking Sorrow and Bathing in Bliss: Liquid Emotions in Chaucer

‘I Will Lead You to the River’: Women, Water, and Warfare in the Roman de Thèbes, Roman de Troie, and Early Chronicles of the First Crusade