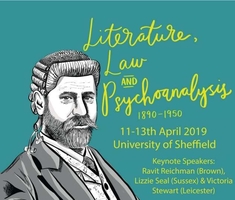 The Special Collection brings together a selection of papers from the ‘Literature, Law and Psychoanalysis 1890–1950’ conference held at the University of Sheffield in April 2019, and supported by funding from AHRC. The period of 1890–1950 was a time of literary experiment, of scientific developments and of worldwide conflict. These changes demanded a rethinking not merely of psychological subjectivity, but also of what it meant to be subject to the law and to punishment. The time is right for the re-examination of twentieth-century literature that ‘Literature, Law and Psychoanalysis’ attempts. This is shown through a recent run of influential interdisciplinary publications. For example, Anne C. Dailey’s Law and the Unconscious: A Psychoanalytic Perspective (2017) has already been identified by reviewers as a watershed moment, as Dailey’s book explores the missed opportunities that twentieth-century culture offered for law and psychoanalysis to be more fully integrated and considers how the relationship might be corrected in the future. This Special Collection chimes with and develops Dailey’s work in a literary direction, as well as engaging in dialogue with other recent, excellent work being done by law and literature scholars, such as Peggy Kamuf’s Literature and the Remains of the Death Penalty (2018) or Robert Spoo’s Modernism and the Law (2018). It addresses topics and contexts including developments in Freudian psychoanalysis; the founding of criminology; landmark modernist publications; and the ‘Golden Age’ of detective fiction.

The Insanity Plea in The Butcher’s Wife

‘It is Introspective, and I Want to Introspect’: Detection, Isolation, and Neurotypicality in Crime Fiction, c. 1891–1940

Race, Racialisation and ‘Colonial Common Sense’ in Capital Cases of Men of Colour in England and Wales, 1919–1957

“Seeing the Actual Physical Betty Kane”: Reading the Fille Fatale in Josephine Tey’s The Franchise Affair in the Age of #metoo

The Transference and the Case of Sacco and Vanzetti

The ‘Reasonable Man’ in Colonial Nigeria

Where Do I Put It? James Joyce’s Buck Mulligan, Bisexuality, and Contemporary Legislative Practice

Justice Denied: Literary, Legal and Psychoanalytic Denial in the Age of Modernism

‘Between Law and Transgression: Literature as a (Non-) Civilizing Strategy in the Early 20th Century’